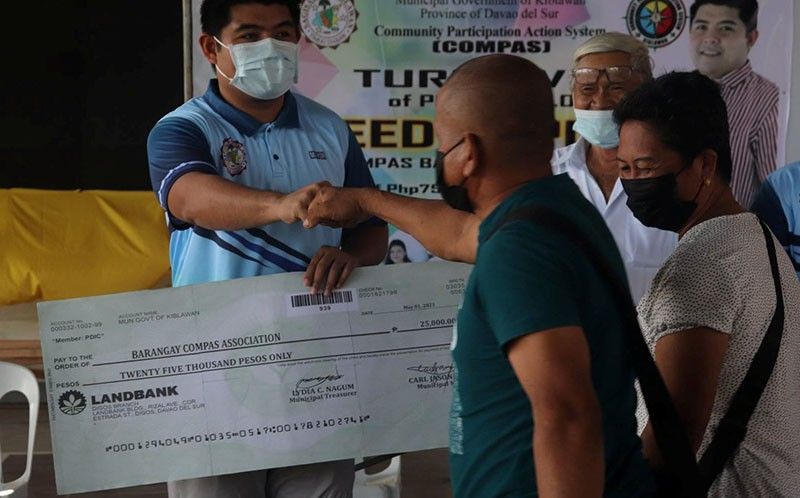 Thirty barangays in Kiblawan, Davao del Sur each got P25,000 “seed money” for development initiatives from the Sagittarius Mines Inc.
The mining firm, more known as the SMI, has been planning since 1995 to extract copper and gold in the adjacent Tampakan town in South Cotabato.
About half of the 30 recipient-barangays have centuries-old Blaan tribal domains whose residents the SMI is helping empower through humanitarian interventions despite its not having operated yet since its inception in 1995.
Radio reports and social media blogs on Saturday said SMI representatives and local officials, led by Kiblawan Mayor Carl Jason Rama, facilitated early this week the release of checks amounting to P25,000 each to the 30 barangays.
The P750,000 total grant for all 30 Kiblawan barangays was drawn from the SMI’s P3 million social development package this year for communities in areas where it has been planning to operate since two decades ago.
The SMI is the government’s contractor for the extraction of copper and gold in the nearby mineral-rich Tampakan town in South Cotabato.
Municipal officials in Kiblawan, in Tampakan, in Malungon, Sarangani and in Columbio, Sultan Kudarat were quoted in radio reports as saying that the SMI already spent hundreds in millions worth of Philippine currency for health, education and socio-economic projects in the four areas despite its not having even operated yet since 1995.
Rama, vocal in expressing favor for responsible mining, said he is thankful to the SMI for its latest release of development grant for the 30 barangays under his jurisdiction.
“We are thankful to the SMI for all of its development programs for the local communities,” Rama said.
Just last April 6, Rama received from representatives of SMI a P3 million worth check earmarked for community-empowerment projects of their LGU.
The SMI also released then separate P75,000 worth check each for the barangay governments of Tacub, Abnate and Bulolsalo in Kiblawan.
The mining firm also provided with a P75,000 grant each the Indigenous People’s Structure, or IPS, in Kiblawan's Barangays Tacub, Abnate, Bulolsalo and  Kimlawis where there are Blaan tribal enclaves.
The assistance was intended for projects meant to address poverty and underdevelopment in the four Kiblawan barangays, drawn from SMI’s social development program allocation. (Phil Star)