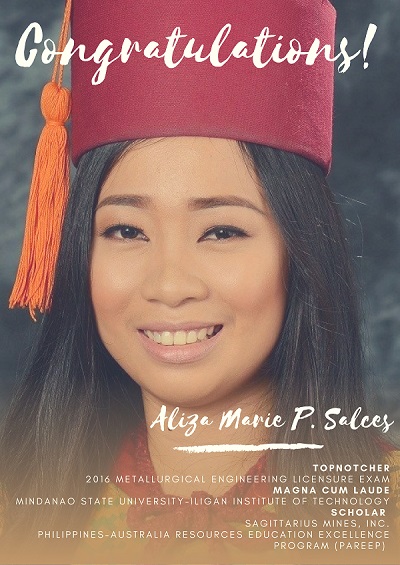 Aliza is a scholar of Sagittarius Mines, Inc. since 2013 under the Philippines – Australia Resources Education Excellence Program (PAREEP).

She received a rating of 87.85 percent, ranking first among 58 other successful examinees.

Growing up as an academic achiever in the municipality of San Francisco, Agusan del Sur in the Caraga region, Aliza continued to demonstrate diligence and excellence in her university studies by consistently making it to the Dean’s List.

She was also active in the student government at the MSU-IIT College of Engineering where she served in the executive council as chairperson of the budget and finance committee.

In a note to staff, SMI President Joaquin Lagonera enjoined SMI employees to join him in congratulating Aliza for bringing honor to SMI.

“Ranking number 1 among the 71 examinees is definitely a significant achievement in the challenging discipline of metallurgical engineering. SMI is very proud in helping this young lady achieve her dreams in becoming part of the Philippine minerals and resources industry”, he said.

Sagittarius Mines Inc., together with other mining companies, contributed funding to the program by sponsoring ten PAREEP scholars per year.