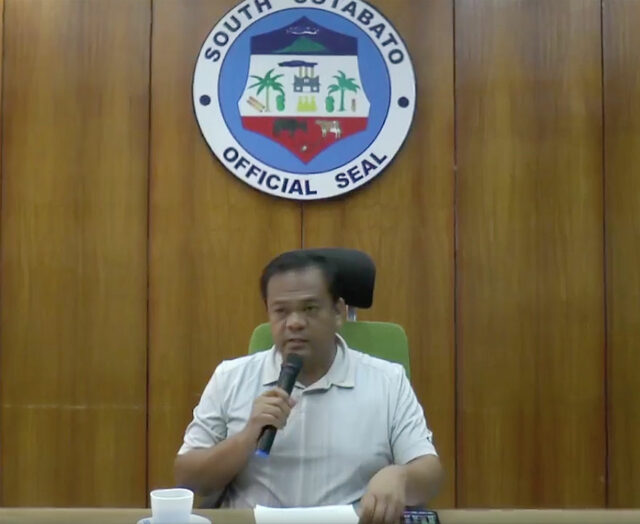 THE GOVERNOR of South Cotabato has vetoed a local council resolution lifting the ban on open-pit mining in the province but stressed that this does not affect the operation of the stalled Tampakan copper-gold project.

“An ordinance is limited to the scope of the local government’s authority,” Governor Reynaldo S. Tamayo, Jr. said in a streamed press conference on Friday before releasing his veto decision.

“The local authority covers small-scale mining like the Minahan ng Bayan sites,” he said in mixed English and Filipino. “This ordinance has nothing to do with whatever the national government decides on large-scale mining.”

President Rodrigo R. Duterte lifted in December last year a nationwide ban on open-pit mining that was imposed in 2017.

Mr. Tamayo said this national policy gives the green light to Sagittarius Mines, Inc. (SMI), which has the license and permit to operate at the site which holds a potential of some 15 million tons of copper and 17.6 million ounces of gold.

Nonetheless, the governor, who won a second three-year term in the May 9 elections, assured that he will protect the province and its residents in all aspects of development, which means striking a balance between economic growth and environmental protection.

“Mining should be done responsibly,” he said.

In a statement released after the briefing, Mr. Tamayo also appealed to the provincial council not to override the veto and allow the incoming set of legislators to further assess the open-pit mining ban contained in the local environment code.

“It is fervently hoped and prayed that the SP (Sangguniang Panlalawigan) shall no longer override my decision to veto this ordinance and will allow the next Sanggunian to conduct its review of the province’s Ordinance No. 4 Series of 2010 otherwise known as the South Cotabato Environment Code,” he said.

Groups opposed to the mining project welcomed the veto but at the same time acknowledged that they need to keep pushing for a total ban.

“The outgoing Sangguniang Panlalawigan members could still override the veto. But at this point of the campaign, we consider this as a victory of righteousness. We remain vigilant until the present threat to amend the lifting of the open-pit mining ban is completely done,” Catholic leader Cerilo Casicas, bishop of the Diocese of Marbel, said.

“We are hopeful that the ban on open-pit mining will remain. We also hope that the (incoming) Board Members who will sit in the Sanggunian will put the environment as their priority focus and not betray the call of the people they need to serve and protect,” IDIS said in a statement. — Maya M. Padillo (Business World)

KIBLAWAN, Davao del Sur - Municipal Mayor Joel "Jojo" Calma of Kiblawan town in Davao del Sur cited the programs and projects extended by Sagittarius Mines, Inc SMI to help alleviate the lives of the people of Barangay Kimlawis and, a...

Read more
It is about time for South Cotabato to reap the economic benefits from its Tampakan Project
Duterte team calls for revival of mining industry
Mining ban not for firms permitted by national gov't, says South Cotabato governor